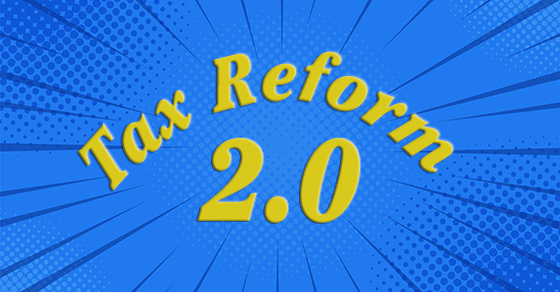 President Trump and Republican lawmakers currently are considering a second round of tax reform legislation as a follow-up to last year’s Tax Cuts and Jobs Act (TCJA). As of this writing, there’s been no actual bill drafted. However, House Ways and Means Committee Chair Kevin Brady (R-TX) just released a broad outline or framework of what the tax package may contain.

One of the main themes of the proposed legislation is to make permanent certain provisions in the TCJA, including:

These pro-taxpayer changes are scheduled to expire at the end of 2025 along with several other TCJA changes, some of which are not taxpayer-friendly.

The framework released by Brady also would help Americans save more for retirement. It would create a new Universal Savings Account that would allow tax-free withdrawals for a variety of needs and would expand Section 529 education savings plans to allow tax-free withdrawals to pay for apprenticeship fees to learn a trade, cover the cost of home schooling and help pay off student debt. Contributions to Universal Savings Accounts would be made with after-tax dollars, like contributions to Roth IRAs. The framework also proposes to permit families to access their retirement accounts penalty free after a birth or adoption and allow new businesses to write off more of their start-up costs.

President Trump has separately suggested lowering the corporate federal income tax rate from 21% to 20%. The TCJA permanently lowered the corporate rate from a maximum of 35% under prior law to a flat 21% for tax years beginning in 2018 and beyond.

Chairman Brady has indicated that indexing capital gains for inflation is also under consideration for Tax Reform 2.0. Indexing would allow taxpayers to increase the tax basis of capital gains assets — such as stocks, mutual fund shares and real estate — to account for inflation. Indexing would result in lower taxable gains when affected assets are sold for a profit. Some observers have argued that indexing could be achieved without the need for legislation by simply issuing IRS regulations that allow indexing.

Chairman Brady has indicated that any Tax Reform 2.0 package probably won’t include extensions of a number of tax breaks that Congress habitually allows to expire and then retroactively extends. These so-called “extenders” will likely be addressed by separate legislation. For individual taxpayers, the two important extenders are the deduction for up to $4,000 of qualified higher-education tuition and fees and tax-free treatment for up to $2 million of forgiven home mortgage debt. Both of these breaks expired at the end of 2017. Other extenders that expired at that time include several business depreciation and expensing breaks and energy related breaks.

Separate from the Tax Reform 2.0 discussions, bipartisan legislation has been introduced in the U.S. Senate to help encourage Americans to save more for retirement. The Retirement Enhancement and Savings Act contains a number of incentives that include allowing employees to buy an annuity; making it easier for small companies to offer retirement plans; and permitting people older than age 70½ to contribute to traditional IRAs. It’s possible these provisions could be part of a 2.0 bill or they could make up a stand-alone bill.

Chairman Brady is encouraging House Republicans to hold “listening sessions” with their constituents during the upcoming August recess with a view toward a committee vote in September. If all goes well, Republicans are tentatively scheduling a House vote on a Tax Reform 2.0 bill by the end of September. Bear in mind that the November midterm election may play into the final package of legislation, as vulnerable Republicans plead their cases for specific provisions. Contact us if you have questions about how the proposed legislation may affect your individual or business tax planning.